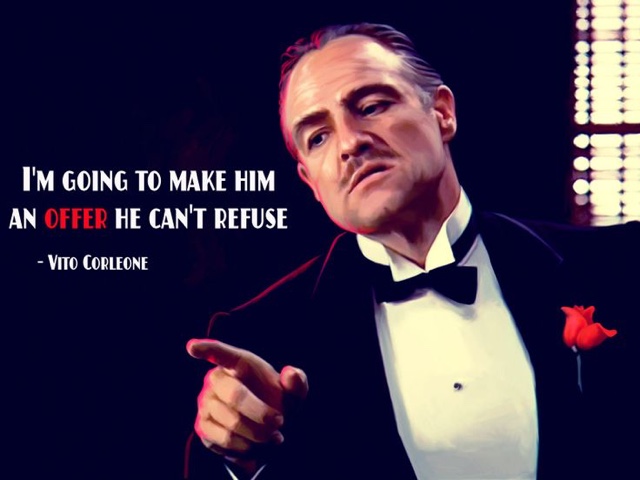 So now that I have come across the boat (NOT) of my dreams I did in fact see a bit of
potential in this sad little unwanted vessel. The positive aspects were adding up quickly. For starters, I was already in possession of a reference book that would guide me through an inexpensive restoration  -yeah right- Additionally, she was small enough that It would take no time to put her back in ship-shape condition. Did I say 'yeah right' already? Finally, I knew I could get it for next to nothing. " Why?" you ask...   Well, that's simple... I figured I would make the seller an offer he couldn't refuse!

In 1972 "The Godfather" portrayed by Marlon Brando coined the term, "I'll make him an offer he can't refuse".  For those of you who saw the movie or read the book you probably remember the original violent connotations associated with the term as it was first expressed. Believe it or not, this euphemism is one of many defined tactics of skilled negotiation known as  brinksmanship. I often wonder if Mario Puzo took this into consideration when he wrote the line in the story. There are scores of research and writings on the skill of negotiation. Some consider it to be an art and science and actually carry out very successful careers as  negotiators...

Now,  I'm not going to turn this into a thesis on the subject of negotiation because it could go on for a very long time. I will go on to say however, that negotiating skills are something we all possess. We negotiate all our lives from the time we are children for extra cookies or more play time,  as teens for a later curfew or higher allowance, straight through to our adult years such as buying a car, a house, or a job interview. Negotiation is an inherent skill that lies within us all and should not be discounted when buying you're first sailboat no matter how overwhelming the level of anticipation or excitement. Believe me, I was excited and perhaps for some cosmic reason I really wanted this boat but I wasn't about to let the seller know that!

I was pretty sure the seller didn't own a horse and I wasn't about to go hurt this guy's dog or cat if we could not come to terms , so the brinksmanship tactic was off the table. Besides, that particular tactic is better suited for mobsters, lawyers, and politicians and wouldn't really apply to this transaction.  Nevertheless, there are many other tactics and styles and my plan was to utilize every last one with the same conviction and confidence that Don Vito Corleone had when he got Johnny Fontane that acting role he wanted.

Before making the first call to inquire about the boat I decided to thoroughly inspect it for any nicks, dings,  dents, scratches, or imperfections that I could potentially use as bargaining chips when it came to discussing price.  As I said in my previous post, the trailer was worth  more than the $600 asking price -hands down- but this is a package deal right? So I decided to group it as such and use the condition of the boat to get the price down. Needless to say the closer I looked the worse it got.... Here's what I found:

Stress Cracks on the deck- 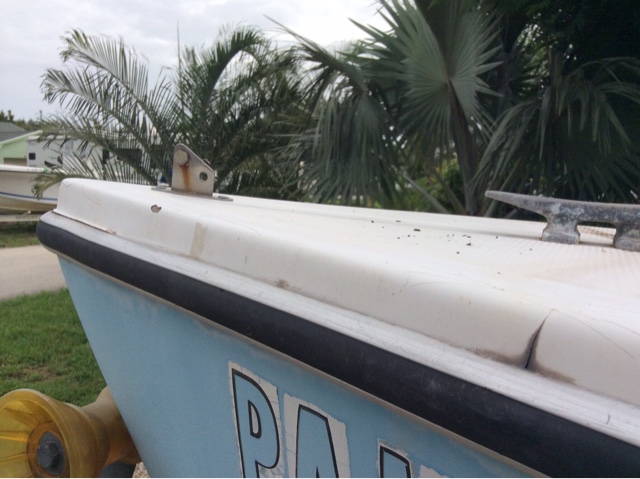 Normally stress cracks on an older boat are common and fairly easy to repair with a little grinding and gel coat application. This is not the case here..  In looking closer it appeared that the forward deck was under some serious upward tension at one time. Possibly from incorrect tensioning or excessive pull of the fore stay (a steel cable that goes from the top of the mast to the bow of the boat to keep the mast from falling backwards). Did she sail through a gale? A hurricane ? I don't know but that crack looked serious.

Not sure if you can tell from this picture but the keel is severely corroded. It's apparently a very photogenic keel because it looks so much better in this picture than it does in real life. This will have to be removed and refurbished or replaced. 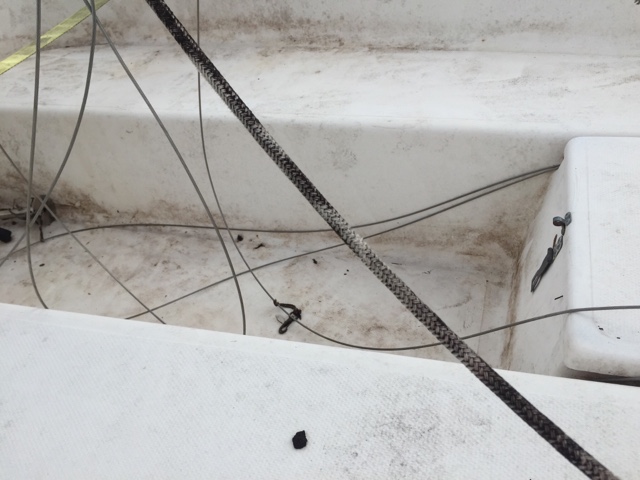 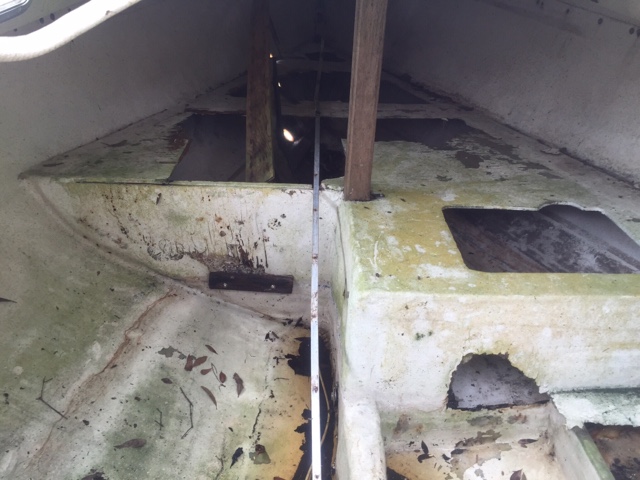 Boats are made for water but the intent of the design is for the water to be on the outside of the boat. This is a direct result of water damage inside the boat. Rotted wood, delaminated fiberglass, and a compromised structure! Major issue!! 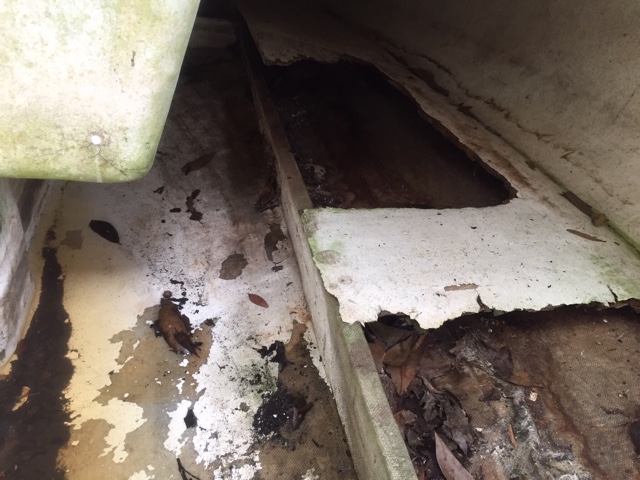 Yes, full of water and leaves. Note the discoloration on the stringer. This is due to saturation and again, another major issue! 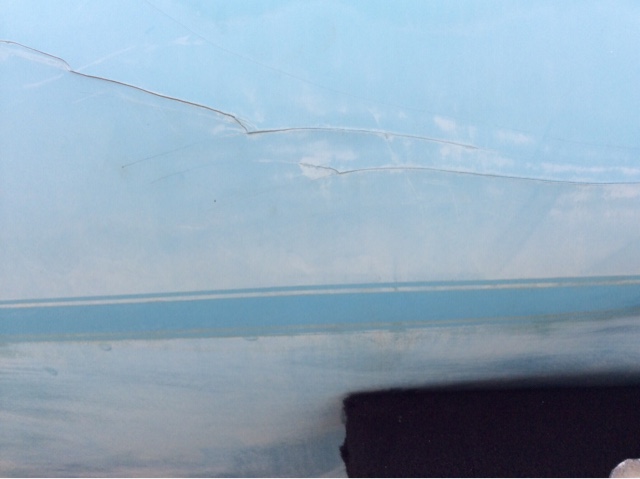 More stress cracks? These look like they could run deeper... Another Major issue!

More of the Hull- 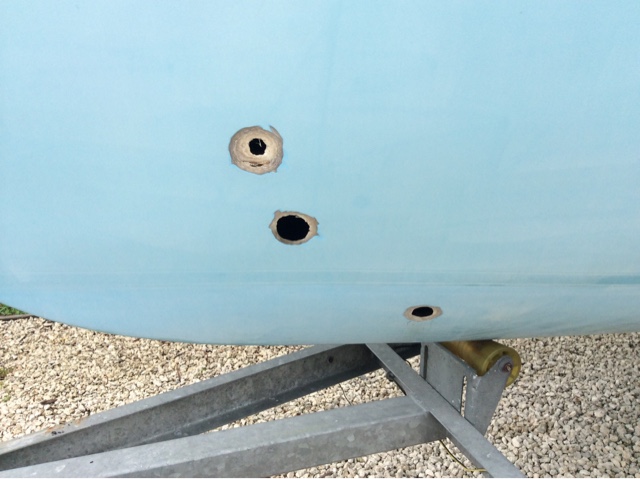 This really caught my attention. For the life of me I couldn't figure out the cause of this defect. Were they bullet holes? Was the seller already engaged in the brinksmanship negotiation tactic? Come to find out the person he bought the boat  from had a few enemies that took a pick-axe to the bow.
Wow... If this boat could talk huh?

Ok... Inspection is over. I think I'm ready to make that first phone call...

I dial the number on the -discarded whiteboard- sign and he answers on the first ring. I introduce myself and say," I'm calling about the boat for sale." I'm psyched at this point because I have all of these bargaining chips as shown in the photos above.
The first words that come across are this, "Yes, hi...  Umm... Listen the boat is really not for sale the trailer is though and it's worth at least $850. If you buy the trailer you will have to dispose of the boat."
In that one single statement, this guy devalued all of my bargaining chips!
He essentially shut down my negotiation strategy before I even had a chance to implement it.  He's good...

Without even thinking about it I replied, "Yeah, I noticed the condition of the boat.. definitely scrap, but I called around and there's not a salvage yard  within 100 miles that will handle  the disposal for less than $300 bucks.... So the best I can do is $300 and I'll take this headache off your hands."  There was a 30 second pause of silence that seemed to last an eternity. He was processing my immediate response. Apparently, he blanked during that pause because he had no idea what a salvage yard would charge, he obviously never thought about it. I had no idea either but I knew the trailer would easily appraise between $900 to $1200 so, at $300 I would be way ahead of the game.
At 31 seconds, he finally replied, "I can't go less than $350."  In that moment I realized that I completely swayed his thinking from the fact that he thought he was only selling the trailer and successfully put the boat back into the negotiation as a bargaining chip...   Boat disposal would now be an expense he was not willing  to deal with. I made him an offer he couldn't refuse....